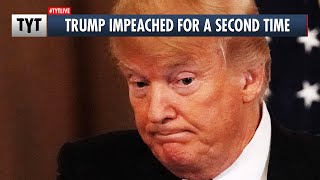 The House of Representatives voted to impeach Donald Trump for incitement of the US Capitol siege. Ana Kasparian and John Iadarola discuss on The The House of Representatives on Wednesday impeached Donald Trump for inciting a violent insurrection against the government of the United States a week after he encouraged a mob of his supporters to storm the US Capitol, a historic condemnation that makes him the only American president to be charged twice with committing high crimes and misdemeano