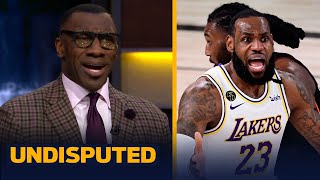 Jimmy Butler had a career game last night to keep the series interesting against LeBron James and the Los Angeles Lakers. With Bam Adebayo and Goran Dragic both out due to injury, Butler had a 40-point triple-double in Miami’s 115-to-104 win. LeBron and Anthony Davis only combined for 40 points. After icing the game, Butler could be heard yelling 'they’re in trouble' as he walked to the bench. Butler became the first player to have more points, rebounds and assists than LeBron in a Finals game.